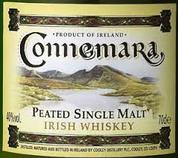 Pour yourself a generous dram of Cooley’s Connemara a rare treat of an Irish peated whisky, if you fancy a real treat then go for the cask strength version.  There are other peated whiskies that you can use in it’s place such as the Laphroaig quarter cask or Ardbeg’s Corryvreckin but this is an Irish story and the fruited peatiness of the Connemara goes so well with this story.

It is a story set in the farmlands of Ireland, I always imagine it as being in Innishowen in the highlands of Ireland, a place where the rivers run brown with peat and the fires burn with an amber smoke.  Take yourself there, at least in your mind’s eye take a good sniff of the whisky and the occasional sip as I tell you the story of Hodden and Dodden and Donald O’Leary.

Hodden and Dodden were brothers who lived on a large farm with many cattle.  Although they had money and wanted for little they desired almost all they saw.  Sadly for Donald O’Leary the thing they saw most was Donald’s small strip of land with his one cow.

Donald was but a poor man who had recently lost his Mother and now lived alone with but one penny and one cow to his name, despite being so meagre Hodden and Dodden wanted his land and plotted to get it.

One night they crossed the road near Glentogher and killed Donald’s cow leaving it for him to find.  Without a cow, they thought, Donald would have nothing and be forced to sell his land for next to nothing.  When Donald saw the dead cow, however, he had a different idea.  Instead of giving up Donald decided to make the most of things.  He cut the hide from the cow and made a rough coat from it, putting a secret pocket in which he put in his one penny.  On went the coat and off to the town of Carndonagh he went.

Donald went to one of the many pubs in the town and ordered himself a glass of the local poteen.  The landlord said ‘that will be one penny Donald’.  Donald made a show of feeling his pockets and then said ‘I am sorry my friend but it looks like I have no money’, the landlord began to fill with rage but then Donald asked for a stick.  ‘Why do you want a stick?’, ‘To beat my coat, you see it is an old coat given to my Mother by the fairies and if you beat it hard whatever money you need will fall from it, it has sad memories for me now she has died and I was hoping to sell it’, having been given a stick, and to the amazement of the landlord, Donald beat the coat and out fell the penny.  Having tricked the landlord Donald had soon sold him the coat for 10 pennies and was on his way home.

On his way he met Hodden and Dodden who greeted him with false sorrow saying that they had seen that his cow had died and that he will need to be selling his farm.  ‘Not at all’, replied Donald,’In fact what a stroke of luck that was for me, I have found out that there is a fashion in the cities for women folk dressing in the hides of cows and the local landlord is willing to pay 10 pennies just for the hide, I have enough money now to buy 3 cows’.  Rather shocked by this and overcome by greed they quickly ran back and killed 10 of their own cows, cut of the hides and ran into Carndonagh and straight into the same pub that Donald had come out of.  ‘Hey landlord, we have 10 hides here will you buy them from us?’ but by this time the landlord had realised the trick played upon him and full of anger and thinking he was being taunted about it he set upon them with all his might.

Hodden and Dodden went home with bruised skin and cut lips and a great desire to get their own back on poor Donald.  ‘Enough mucking about’, said Hodden, ‘we will grab him, put him in a sack and drown him in the lake’.  Still full of anger of they went, bursting through Donald’s door and forcing him into a sack that they tied tight.  As they carried Donald to the lake they began to realise just how heavy he was and just how thirsty work this could be.  Seeing a lone pub on the way they hid Donald behind a hedge and went in for a ‘quick’ drink.

Donald lay quietly in the sack until he heard a farmer driving his cows coming along the road, then he began to shout. ‘I won’t do it, you can’t make me, I do not love her’, he screamed, again and again.  The farmer looked around at the sound then saw the sack and went up to it,’what is this noise about’, he asked. ‘Oh please help me’, begged Donald, ‘I have been kidnapped by 2 rogues who are in there having a drink.  They say that the princess of Ireland has it in her head that she must marry a farming man from these parts and they are going to sell me to her and force me into marriage’.  ‘Lucky you’, replied the farmer,’ I hear she is as pretty as she is rich’.  ‘Well I have a love of my own and it would break my heart to leave her’ explained Donald and before long he had convinced the farmer to swap places with him so that the farmer laid quietly in the sack and Donald took the farmer’s cows back to his small strip of land.

Shortly afterwards Hodden and Dodden came out of the pub, picked up the sack and before long had thrown it into the lake not realising that they were drowning the wrong man.  Happy with their work they ran home eager to take Donald’s farm that they thought would be empty.  But there was nothing but surprise when they got there and saw not an empty farm but one bursting with handsome looking cattle tended by a healthy and happy Donald O’Leary.

When Donald saw them he called over to them, ‘let’s not fight boys, I hold no grudge for you trying to kill me.  You see you did the best thing that anyone has ever done for me.  When that sack went under the water I thought I was going to drown but then, just as I was about to give up, I felt myself being cut loose from the sack and by magic I could breath under the water.  You see under the water there is an opening to the land of fairie and the queen herself came to my aid.  So friendly and pretty she was that she took me down to that magical land and I was treated like a King.  After many weeks of this I said I had to go home and she gave me all these cows as a farewell gift and told me that any friends of mine would be welcome to visit and would get the same welcome. So it was that I left the lake only to find that no time had passed at all, so thank you my friends’.

On hearing this Hooden and Dodden said ‘your welcome friend’ and ran as fast as could be back to the lake.  They ended their days at the lake, swimming as deep as they could and searching for that secret entrance.  Donald O’Leary, however, just crossed the road and took over their farm.  And that is the story of how Donald O’Leary became the richest farmer in the area.