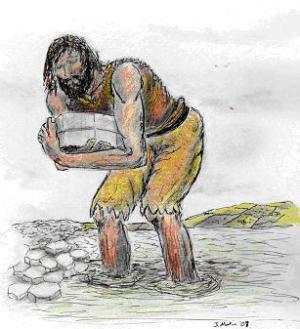 I feel I ought to apologise for choosing such an obvious pairing as Bushmills and the tale of Finn, but they go so well together and the geographical closeness of them makes it a shame not too.  Apart from that it is one of my favourite stories

Finn – or as some call him “Fingal” was a giant who lived as a child in servitude to a larger giant.  One day when cooking a magical salmon for his master Finn burnt his finger on the fish and gained the ability to see the future whenever he sucked his thumb.  He was a proud Giant and when he escaped from his master and grew up he fought all the giants in Ireland and won. Finn was not going to be put in servitude again.  He married and lived happily near the north coast of Ireland not a stones throw from where Bushmills distillery now lies.

One day he decided it was time to travel to Scotland and see what giants he could fight there so he built a road now known as the Giant’s Causeway.

When he was finishing it he trapped his thumb under the last stone.  In pain he lifted his thumb out and sucked it –straight away he saw a vision of a Scottish giant so big and strong Finn knew he could not win any fight.  The vision also told him that this giant also had a magic thumb – but in his thumb was the source of his great strength.

Finn ran home frightened.  On seeing him his wife, Oonagh, poured out a couple glasses from a large cask that had been filled from Finn’s copper pot still.  They drank and thought and after a short while she knew what to do.  She got out an old pram, dressed Finn as a baby and put him in it.  She then baked 2 loaves of bread. In one of the loafs she put in a heavy griddle pan and made a large ball of curd which she rolled in the dust so it looked like stone.

Having seen Finn building the road and knowing his reputation for fighting, the Scottish giant, Cucullin, ran over the causeway to fight Finn.  He came to Finn’s house and demanded to see him.

Cucullin came in.  After a short while Oonagh said she was cold and asked Cucullin to lift up the hill and turn it round so the wind would not blow in the door.  Cucullin said he could not do such a thing and was amazed when she said that Finn did it twice a day.  She then said she was thirsty and poured three glasses straight from the still.  She drank one straight down, gave one to ‘the baby’ and the other to Cucullin.  Cucullin saw her and her baby drink it like water and not knowing better he gulped it down quickly pulling faces as it burnt his throat.  ‘So you are not used to uisgee then’ she said and asked him to squeeze water out of a stone for her.  ‘Do not be stupid,’ he said, ‘how can you get water from a stone?’

‘You are not very strong are you,’ she replied, ‘even Finn’s baby can do that.’ She gave the curds that looked like stone to Finn who easily squeezed the whey out of them. Cucullin was amazed.

‘You must be hungry’, she said, and she gave a loaf to Finn and the other, with the griddle hidden in it, to the giant.  Finn ate his with no problem but the Scottish giant broke his teeth on his.

Cucullin became scared that if the baby was so strong then Finn must be even stronger. Curious he put his fingers into the baby’s mouth to feel how sharp his teeth must be.  Finn took his chance and bit off the giants thumb and in doing so took away his magical strength.  Cucullin was overcome with fear and ran away pulling up the causeway as he went.  Some say that he had the last laugh though, for as he left he grabbed what he could from Finn’s house – and this included Finn’s copper pot still.

Now I do not want to cause any arguments but could this be how whisky first came to Scotland?